A Swedish American at Gross-Rosen

There are plenty of things happening in Sweden, but I just really enjoyed my trip to Poland. So you’re stuck with one last Polish post. As I mentioned, I managed to get myself out to a concentration camp. Gross-Rosen just outside the town of Rogoźnica.

It was quite the adventure just getting there. About 65 km southwest of Wroclaw, I needed to take a train. I got my ass up to catch the train leaving at 7:44 in the am. I made it to the train station with about 15 minutes to spare.

I had read that younger Polish people speak English. And older Polish people vehemently deny speaking the Russian that they were forced to learn during the communist era, but can manage. So the lesson was, with young people you can get by with English. With old people, Russian. I do not speak Russian. With that in mind I went up to the window, picking a younger looking girl in hopes that she would speak English. She did not. So I pointed at my paper. She didn't have any idea. Finally she pointed me to a different window.

I walk down to the other window, showing a little bit of hustle because time is running away from me. I wait in line at a younger woman’s window, but am then called to an open window (wo)manned by an older lady. Who didn't speak English. So I pointed. And she didn't know anything about this town. After rifling through a card catalog. Seriously, a card catalog. And the computer she finally finds it. Sells me a ticket at 7:42 am. Writes down the time and “P-2.” Which I assume to mean Platform 2. I run over. Find "Peron 2" and run up on the assumption that P-2 means Peron 2. I ask the conductor if he speaks English. He shakes his head no. I point to my paper then point to my train. Nyet he says. Shit. I had a feeling this was going to happen. Mostly because the sign said the train at Peron 2 was leaving at 7:46 and the sign at Peron 3 was leaving at 7:44, but I just had to trust the Polish ticket seller. But hearing nyet I turned and raced down to Peron 3. There was no train.

I went to the information desk. Which I probably should have done to start. The girl there spoke English. Finally. She told me I had just missed the train. Well no shit. The next one didn't leave for another two hours.

I said no thanks. I was going to take a taxi. I was determined to get to the Gross-Rosen concentration camp. I went outside of the station and grabbed a taxi. He did not speak English. Obviously. He also didn't know where Rogoźnica was. Obviously. After about 10 minutes of consulting both a map and a GPS he found it. And away we went. I paid 200 zlotys for this. Which seemed like quite a bit. About 65 dollars. But like I said, I was determined. 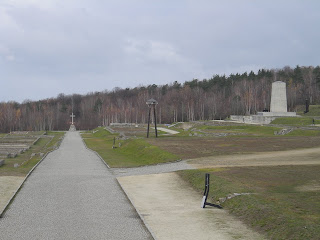 I made it to the concentration camp after about an hour of silence. Except for Polish talk radio. And I arrived to emptiness. Not a single soul around. I walked in, no locks, everything was wide open. No employees. Nothing. So I turned around and found a building which happened to be the museum. And was empty. But suddenly a girl appeared. I told her I wanted to come in. I was prepared to pay. Instead she handed me a notebook with the entire museum translated to English. Amazing. But then I asked how much it cost. Nothing. It was free.

So I walked through the museum, constantly reading my notebook that had all the Polish and German text translated to English. It was glorious. And depressing. And amazing. And historical. The stories it told were awful, but at the same time I couldn’t stop reading. 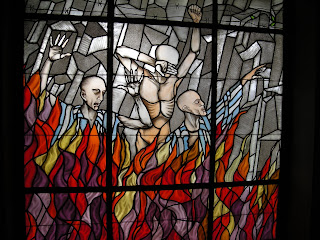 The most memorable, in the most awful way, was the story of a new prisoner who had recently arrived to the camp. I believe he was Hungarian. He did not speak German. He was told to go across the road to the farm house and get some hay. Other prisoners saw this happen but did not speak up. They feared punishment. A group of young boys from the town were standing around watching, snickering, anxiously awaiting the inevitable. The new prisoner went to the guard at the main gate and told him he was running across to the farmer’s place to get some hay. They guard let him pass. And as he passed and had his back turned to him the guard gunned him down. The man was reported as having been killed while trying to escape.

After I had read through my notebook I decided that I would buy something. Maybe a book. I wanted to give them some money. It was empty, having worked at a museum that was empty I felt sorry for them. Plus I kind of wanted to give some sort of monetary support. So I took a look at the books. Not a single one in English. So I passed.

And out the door I went to the actual concentration camp. Gross-Rosen actually started as a work-camp being home to a large rock quarry. It was then upgraded, using that term very loosely, to a concentration camp. Over 100,000 prisoners went through the camp, over 40,000 of them died. If you were put to work in the rock quarry you averaged five weeks. After five weeks you were dead. 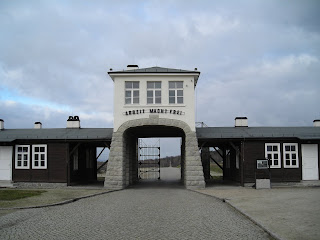 Really there wasn't much left of the camp. Only a few buildings were left standing and the rest were just old foundations. Of course one of those buildings was the main building at the entrance. Where I saw, to be blunt, one of the most fucked up things I have ever seen. Above the entrance were the words “ARBEIT MACHT FREI.” In English, “work makes free.”

Surrounded by the beautiful Polish country landscape, forests, groves of trees, the entrance stood in stark contrast. Which really seemed to demarcate the atrocities that took place inside the fences. Because passing through that entrance a prisoner walked under what was some sort of Nazi attempt at humor, or irony, or maybe just evil in those three words.

There were a few memorials; a large cross which, due to my knowledge of the Polish language, I decided was donated by Pope John Paul II, a Pole. Another was a large memorial to all victims of the Holocaust. On it were some plaques which were written in different languages honoring those who died at the hands of the “Nazi barbarians.” Of the languages I could read, all of them used that very term. I think rightfully so, but interesting nonetheless. 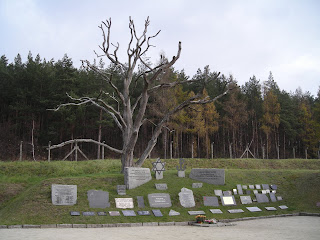 As I left the camp I decided I was going to get some food. I still wanted to give the museum some money. So I went into the cafe. Which wasn't so much a cafe as a room with a lot of seating and a coffee machine. I decided to get some hot chocolate from the machine. There were no cups. I gave them no money. 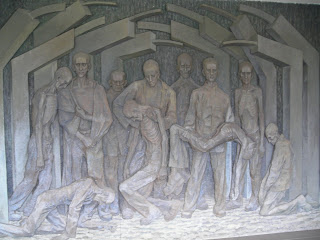 I had been at Gross-Rosen for about two and a half hours. I hadn't seen a single other visitor. It was me and the few people who worked there. But as I left the parking lot two men had parked their car and were walking towards the museum. It was a shame. I had hoped to see more people. Because it was well worth the taxi trip out there.

After having left the camp I started walking into town in hopes of finding the train station. Because Rogoźnica wasn't exactly a bustling metropolis where I could just grab a taxi. So I wandered around, and came to the edge of town. So I wandered the other way. And came to the edge of town. I think I hit possibly every edge of town in Rogoźnica. Finally, I found some train tracks and began following them. As I followed the tracks I noticed a freight train being loaded so I walked towards it in hopes of getting some answers. I found some women working in the office. Who didn't speak English. After some pointing and gesturing I discovered that I was in fact in the right place. Unfortunately, the next train wouldn't come for another two hours. So I was stuck in a town with a population of maybe 200 people.

But I found a truck stop restaurant, had some delicious pierogis and wandered around looking at the massive church that towered over the town. I finally made my way back to the train station and got on the train on my way back to Wroclaw. Pleased with my decision to have taken the time to get out to the Gross-Rosen concentration camp.