Moving to Sweden – Getting from the Airport to Stockholm City

Once again, it’s time for a new Moving to Sweden post. We’ve covered quite a bit:

And the plan is to continue to cover quite a bit. So with that in mind, it was time to get back to basics. We’ve discussed packing, but neglected to discuss what to do immediately upon landing in Sweden. This one could actually double as a Visiting Sweden post also. Since to land at the airport does not necessarily you have taken the plunged and moved here. But I digress. Because now we need to get from Arlanda airport to Stockholm.

Chances are once you land in Sweden you’ve had just about enough. Enough travel, enough sitting, just enough. Luckily, getting through Swedish customs is ridiculously easy. Regardless of your passport really. You might have to wait in line for a little bit, but you’ll breeze through. And to be honest, it’s mostly just because there isn’t the same amount of traffic at Arlanda as you’ll find at Heathrow or O’Hare.

Then you’ll get your bags. I’m not going to help you with this. You’re on your own.

But once you have your bags you need to get into town. Because like many large airports, Arlanda sits a bit outside of Stockholm. North of town if you were really wondering. There are a few different options when trying to get into town. A bus. A train. A taxi. A car. 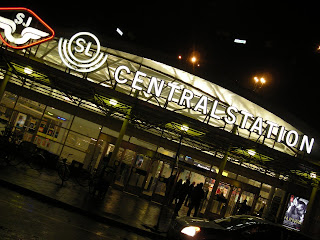 First option is the bus. Flygbussarna. It takes about 45 minutes to get into town using the bus. They will take you right to Central Station. The bus leaves about every 10, 15, or 30 minutes depending on the hour of the day. You won’t have to wait too long though is what it comes down to. As of right now a one-way adult ticket costs 119 SEK. Make sure to ask for any discounts you can think of. Student. Retired. Youth. Give it a shot. Even buying online will save you a bit of cash. Stockholm’s expensive and you might as well get in the habit of saving money where you can.

Stockholm public transportation now offers you options as well. Train options. Pendeltåg options. It's not bad and will take you about 38 minutes. About. You'll have to pay for a regular ticket to get yourself to Stockholm. But if you're planning on staying, the 30-day SL card is the way to go. Unfortunately, you'll also have to pay an 85 SEK station fee. That's the fee that goes straight to the railway. Apparently there was an agreement made back in the '90s when the station was built out at the airport. I don't ask questions. Either way, it's cheaper than a taxi.

Your next option is the train. Arlanda Express. Which I would suggest if you are under 26. Because if you are under 26 years old you get a cheaper one-way ticket. Otherwise, a normal adult one-way ticket costs 260 SEK. But make sure to again ask for discounts, they even have weekend discounts sometimes so always ask. They also like to have discounts for buying two tickets at a time. Don't know anyone? Ask the person behind you in line. It will save you both money. The trip on Arlanda Express takes about 20 minutes and puts you right into Central Station. As a general rule Arlanda Express leaves every 15 minutes, again though, depending on the hour it leaves more frequently or less frequently. Check the timetable.

Taxis are next. Which I don’t suggest at all. They have fixed rates between the city and the airport but I’m just not a fan. It’s usually about 450 SEK. The bigger the taxi the higher the fixed rate. The last time I used a taxi I was in a bit of a flight induced stupor and just snagged the closest taxi. I was by myself. And found myself in a big van. By myself. So I had to pay about 850 SEK to get into town. By myself. Good times. I can’t really guarantee any sort of time table here with taxis. Depending on traffic and the sanity of your driver you might make it in half an hour. Or it might take an hour and a half.

Uber is another option. I've never used it. It exists here and will cost you about 520 SEK from Arlanda to Stockholm City. So it's not cheap.

Finally, there is a regular car. And by regular I mean not a taxi. You can rent, which I have never done so have absolutely no experience, or you can just hope that you have a friend or family member who has a car and is willing to pick you up. When renting, there are plenty of rental agencies around the airport and signs inside directing you to them. It’s like any other airport when it comes down to it.

In the end though, despite the various options, I would suggest the Arlanda Express. It’s quick, it’s easy, and if you get a discount it’s relatively cheap.